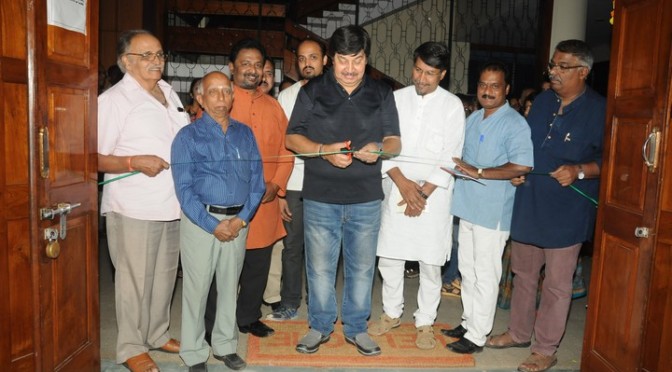 The 34th YPS All India Salon of Digital Photography 2016 Exhibition was inaugurated by the famous Film Actor Dr. Srinath and was presided over by Dr. M.S. Muthy, President, Lalitha Kala Academy. The function commenced on time and at 5-30pm, Dr. Srinath inaugurated the Photo exhibition.  Award winning images from the Salon were showcased at the Exhibition for three days from November 17th to 20th. The prints were sponsored by Prabhu Photos. YPS thanks Sri. Allama Prabhu for this kind gesture.
The programme was compered by Smt. Kshama. After nice rendering of invocation song by Kshama, President H. Satish welcomed the gathering. In his speech, Satish stated that YPS is 45 years old and continuing with all its glory and has conducted 34 All India salons.

Dr. Srinath in his speech told that, though he is a cinematographer, he was happier to be in front of the camera than behind. He appreciated the work done by YPS and he was mesmerised to see the quality of images in the exhibition.

Sri. K.S. Srinivas, Salon Chairman spoke about the quality of images that came for the judging and how we introduced the Special software created only for judging. This software was developed by our members, Sri. Murali Santhanam and Sri. Deepak Eshwar. Hats off to them for their commendable work. He elaborated on the judging process, exhibition and printing of the salon souvenir. He also thanked all members for the support. Sri. H.V. Ramachandran, Salon Secretary read the salon report with statistics.

Later Dr. M.S. Murthy released the Salon Souvenir. Dr. Murthy, during his speech, offered to provide help to YPS from Lalitha Kala Academy for conducting workshops and also extended invitation to hold seminars and programmes for YPS. He proposed a workshop with YPS on the art of Abstract Photography.

Most of the Award winners from Bangalore were present and received the awards from the Chief Guest. This time all cash awards were sponsored by our YPS members. When Mr. Satish requested members to sponsor cash awards, over chats, on the 2nd day itself, the collection was nearly Rupees 60,000. Such was the enthusiasm and generosity of the members. We thank all of them for their support without which this salon would not have been successful. We thank Sri. E.Hanumantha Rao’s Trust for sponsoring awards in the Nature section.  YPS thanks all the sponsors’ advertisers and all those who supported directly or indirectly; the Executive and Salon committee members, who were the backbone to this event.