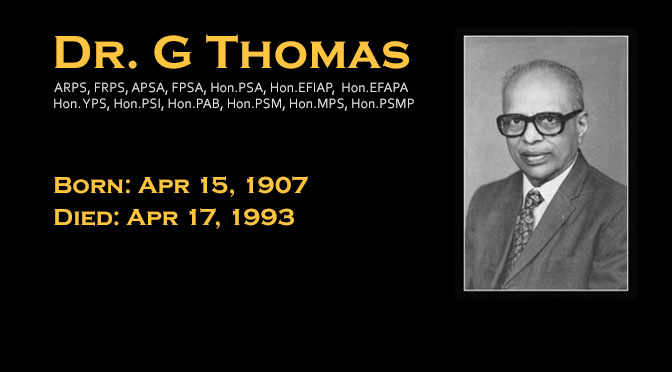 During the YPS Meet held on April 16th at Venkatappa Art Gallery, YPS members, led by Shri. S Satish, President, YPS, took some time to remember the great photographer Dr. G Thomas and walk the memory lane to view some of his pictures.

Dr. Thomas was born on April 15th, 1907. After taking his M.B.,B.S. Degree at Madras in 1929, he was practicing as a Medical Doctor at Madras, Kanpur, Jaipur and Bantva (Saurashtra), the scene of many of his pictures, before settling down in Bangalore in 1943.

His interest in Photography started at the age of 12 and became a more serious passion in 1937 when he became a member of the Photographic Society of India. He founded and ran, as Secretary, the 1940 Portfolio Circle and in 1945, he became the founder, the heart and the soul of the Mysore Photographic Society, both of which events are important milestones in the history of Photography in India. In 1953, he founded, and continued as Secretary General of the national body, the Federation of Indian Photography.

His personal achievements are listed below and all that needs to be said is that more than anyone else, he has transformed the “frog-in-the-well” that Indian Photography had become, into a National Movement, with extensive International relations with Photographic Society of America and with the Federation Internationale de l’Art Photographique, which he helped to shape, nurture and expand. His reputation is un-equalled as a judge, critic, writer, lecturer, guide, philosopher and friend. As an organiser he is nonpareil.

He had travelled extensively abroad to build bridges for Indian Photography and is now Continental Representative for the FIAP in Asia and President of the Federation of Asian Photographic Art. He was the Honorary Representative of the PSA in India. For his immense contributions to the cause of Photography, the Photographic Society of America conferred on him its rare distinction of Honorary Membership in 1976.

He passed away, leaving a large vacuum in the field of Indian Photography 2 days after his 86th birthday on April 17, 1993. He is a Honorary Member of YPS. YPS will always remember him for his leadership, passion and contributions to establish India on the map of International Photography.

“My good friend, Dr. G. Thomas, has been devoted to photography for several decades by now. In 1974 he was invited by the Photographic Society of China to exhibit some of his pictures at Taipei. His selection of natural scenes is unexcelled and his composition is especially of the highest order. Even ordinary scenes would be turned into remarkable sights by his unique choice of light and angles. They are all masterpieces, indeed.

Generally speaking, the selection of scenes is an acid test to the photographer, for one’s sentiments and feelings of the moment are all fully revealed by the shots he makes. In the case of Dr. Thomas, his works best demonstrate the beauty and depth of Oriental culture and I have been deeply impressed by his accomplishments. When one sees his pictures, one knows what a highly cultured gentleman and a sensitive artist he is. The present collection of landscapes contains Dr. Thomas’s most valuable works and deserves careful study by all lovers of good photography.”

The Greatest Loss to the Federation

“Dr. G. Thomas, our Founder, President of Honour, Hon. Member, Secretary General, Treasurer of FIP and Editor of the Viewfinder passed away on the 17th of April 1993, two days after his 86th Birthday.

Guide, Philosopher, Friend, Physician, Father Confessor to one and all, he will be sorely missed by thousands in the years to come.

He had achieved practically everything one could have achieved in the field of Photography and in 1953 his concept of the National Federation was given shape by him and created single-handedly, and is what it is today. His was a unremitting labour of love for forty years for several hours a day, every day, and his handling of the FIP finances was so perfect, that it was almost unbelievable. And, he had nothing to gain from all this personally, but his dedication, commitment, and sheer hard work can never be equalled.

One and all of us, in the Federation are one with Dr. John A. Thomas, Dr. (Mrs.) Manorama Thomas and David Thomas in their great loss and share their sorrow in full measure. We will miss the good doctor greatly in the years to come.

Dear Doctor ! we will look after the Federation your Baby, as best as we can, in the spirit in which you would have done, and see it survives and flourishes!

May your Soul Rest in Peace! “

15th April 1993, the date marks the 86th Birthday of our Founder Dr. G. Thomas: It was planned to felicitate him on the day, by conferring of “The President of Honour” and “Hon. Member” of the Federation. As he was unexpectedly taken ill this celebration had to be in very low key, and after the Function detailed below the President, Vice President and Secretary General, representing the whole Federation Membership had to briefly meet him in the Intensive Care Unit of the Hospital, hand over the citation, and pray for and wish him a speedy recovery. As part of the programme, the Exhibition” 150 years of Photography” India 1839-1900, collected by Dr. G. Thomas, masterminded by Dr. N. Bhagwandas, FIP President, recreated by Rajan Babu and associates of the Andhra Pradesh State Akademi of Photography, was put on display at the Mythic Society. It was inaugurated by Dr. Suryanath U. Kamath, Polymath, Historian Scholar. The public response and Press support were surprisingly good. (Photo on Cover4) Also, the Federation took the opportunity to hold its Working Committee Meeting and Extraordinary General Body Meeting to confirm the decisions of the similar meeting held at the Jamshedpur Convention on 6.2.1993.

50, Sri Ram Mandir Road was the most famous address in the Indian photographic scenario for nearly 50 odd years. Today you will not find that remarkable spacious cottage, which was known as the Head Quarters of the Federation of Indian Photography. The memories of those fortunate days of frequenting this place and interacting with the man who shaped the destiny of photography in India is something which time may never erode. My better-half, a neighbour and fondly called ‘favourite patient’ by the Doctor-painter-photographer and photography administrator, joins me and all members of Youth Photographic Society in paying tribute to the Pithamaha of Indian Photography -Dr. G. Thomas, HOD.FRPS, HOH.EFIAP, HOO.PSA, EPSA, FRPS. Here reproduced are some of the enlightening words penned by him.

Photography, Yesterday and Tomorrow, May 1973

“The pictorial outlook in those happy days was essentially the classical, romantic styles, nurtured by the veterans of those days. But, this outlook has of late begun to be nudged out be experiments which vary from the ‘novel viewpoints’, ‘blurred motion’, ‘technical jugglery’, life in the raw’, ‘slice of life’, ‘decisive moment’, and other attempts, which have not so far displayed any content commensurate with the genius and culture of the country. Now then, when we come to talk of tomorrow, we can but conjecture the trends, but cannot predict the practitioners, nor anticipate the events. But, it stands to reason that the photographer of the future will be a better versed person, both in the techniques and in the basic sciences, whereas yesterday the photographer learnt what he knew by trial and error, tomorrow, he will learn by it from books and teachers.”

“The power of the printed word is vast and potent. It matters not whether the content of the word is trite or profound, wise or silly, true or false, the fact that it is in print is enough to leave an indelible scar ‘for better, for worse’ in the minds of those who read it… may we implore those who have anything to do with publications to stop and think for a while before they rush to publish all that they may have in the recesses of their brains, but which may, perhaps, be most often best left unsaid.”

Address given at the opening ceremony of 2nd MPS International Salon inaugurated by Sir CV.Raman, 1949, Bangalore.

“The first thing that strikes you as you go round the Salon will be the unity of the world in the field of art. Behind the news paper headlines that disturb our tranquillity of mind, you see, albeit dimly, through these pictures, artists, who are just human beings like us, capable of pursuing the most peaceful and the most satisfying urge to make pictures with their cameras. These artists surely have emotions even as we have and react at them much as we do. they live, perhaps in strange climes and talk even stranger tongues; but their pictures talk to each one, in our own tongues and touch the cords in our hearts in a way that is limited only by our capacity to respond to the stimulus. Is it not a proof then, that we belong to the “One World” which seems nearer to the artists than to the politicians?”

After taking MBBS degree at Madras in 1929, he settled in Bangalore after practicing medical in many other places. His interest in photography started at the age of 12 and more seriously in 1937. He became the founder, heart and soul of Mysore Photographic society in 1945. He founded and continued as a secretary of the Federation of Indian Photography for 40 Years. He was a Judge, critic, a writer, a lecturer, guide, philosopher, and friend to many and his record unequalled. He was also a Continental Representative of FIAP an Hon. Representative of PSA in India. His style of photography was described as ” Classic-Romantic”, he is not an illustrator, but a creator, using the Subject Matter to build up a composition of line, tone and mood. He was using a fully non automatic VKP Exakta, with an Uncoated Tessar Lens. He used Super xx film and a solvent Developer, MCW-2a loaded with hypo. He had achieved Practically everything one could have achieved in the field of Photography. He was awarded Kannada Rajyothsava Award and was honorary member for many photographic societies. He Passed away on 17th April 1993.