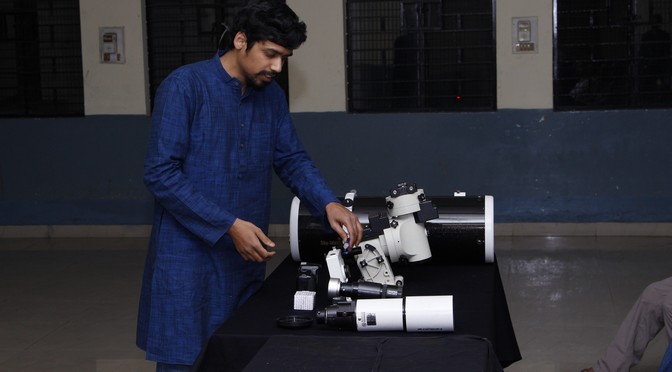 One of the tasks that the YPS EC team had taken on themselves is the intention to introduce diverse photographic topics to the YPS members. In line with that objective, right on the heels of Under-water Photography, YPS organized another talk that would take them to the skies. The Astrophotography session by Shri. Keerthi Kiran, a hobby astronomer and the Secretary of Bangalore Astronomical Society, did just that. The Astro program also brought in several stars of YPS into State Youth Centre like Shri. Dev, Shri. Manoj Sindagi and many other seniors. It sent us on a celestial spin and we hope we can organize more programs that would draw the seniors into our activities. 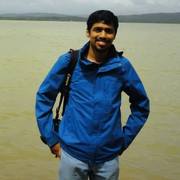 Please read the YPS Event description of “Event Photography” for more details on the speaker. Shri. Satish, President, YPS introduced Shri.Keerthi Kiran to the audience who were eagerly waiting for the journey to begin and quickly handed over the controls to him.

Within a short span of an hour and a half, he covered an Introduction to Astrophotography, Planning Trips for Astrophotography, Post-processing techniques and explained about the Equipment used in  Astrophotography. There were plenty of new things to learn from histalk which was new for many of the participants. Here are some of the concepts explained.

We thank Shri. Keerthi Kiran for sharing his PPTs. 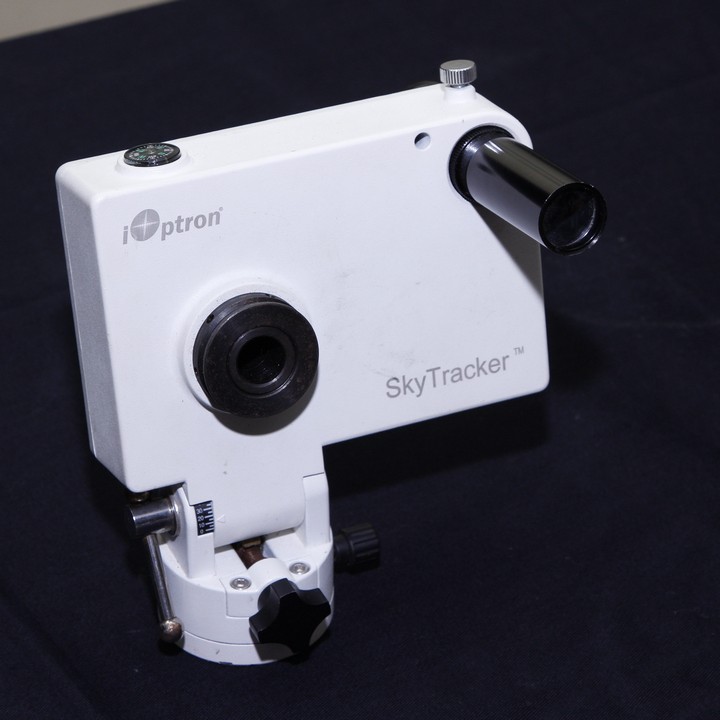 He introduced to the audience host of equipments and gadgets that would be required to capture what is in store in skies. Most of the gadgets named by him were Greek and Latin, but for things like camera, lens and telescope. However, Shri.Keerthi with his explanation made it simple for everyone to understand the gadgets he uses in his photographic ventures. We all have experienced that taking pictures in low light requires longer exposures. When it comes to shooting celestial objects this is a challenge because they keep moving across the frame at a constant and fairly fast pace due to the earth’s rotation around its axis. Due to this round stars and planets appear as trail or line on the frame.

SkyTracker offers a simple solution. It keeps rotating the camera in the direction opposite to the rotation of earth at the same pace, making the stars to appear in the same place on the sensor, thereby enabling longer exposures to be used. To use this, the photographer first aligns the Star Tracker to the axis of the earth’s rotation by using a Polaris Finder, a small telescope built into the SkyTracker, to the Pole Star or “Dhruva Nakshathra”. We can now attach a Tripod head to the SkyTracker and make the camera to point to the area of the sky we want to shoot. The SkyTracker constantly moves the camera and the head at a constant pace so that long exposures are made possible.

Astrophotography is a heavy subject 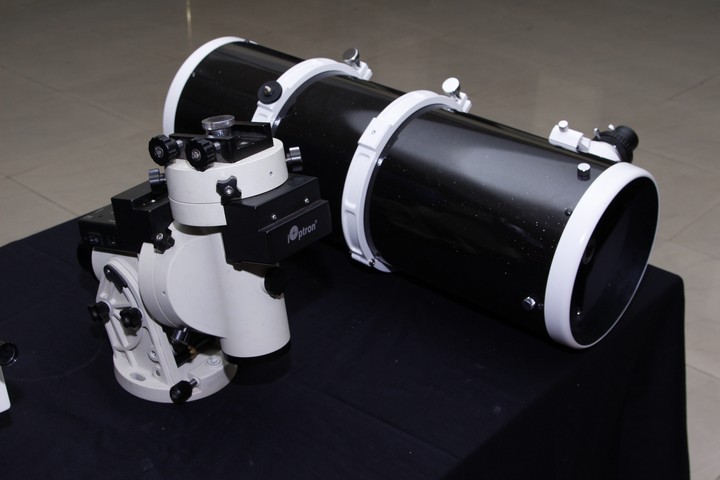 It is not that we can go out and straight away shoot pictures, as we do in the case of landscapes or wildlife or anything else. The planning and preparation required to go about shooting celestial objects are much more than what we do for other types of photography. Shri. Keerthi explained the points which we need to take care before starting our journey. Here are some information that he shared that explains the difficulties involved:

It was very nice of him to have carried some of the equipments he uses to show and explain the use of each one of them like Skytracker, Telescopes, Astronomical Mounts, etc. Mr. Satish’s statement that his 600mm lens is dwarfed in front of the 8 inch telescope he carries truly says how big and heavy the equipment are. The very sight of them made people think as to how we can carry these kind of things always to do Astrophotography. When he said that his tripod itself weighs about 30 kgs, everyone had their mouth open in astonishment. Shri. Keerthi narrated how they go out to various places, by airlifting their equipment to the nearest airport and then undertake further road journey to reach their favorite and strategic destinations.

With regard to the camera, he said that, most DSLRs can be used to do Astrophotography, but it would be good to use a specially made camera for the purpose if possible, to get the best results under specific conditions. Those cameras are modified at the time of manufacture to remove the “Infrared” filter that, in normal cameras, filters out infrared light from reaching the sensor. But many celestial objects emit light in wide range of color frequencies including Infrared. By removing the Infrared filter, the Astro Cameras allows pictures to be taken of stars that emit Infrared light. He also had a tip to share, as to how we can modify our camera to suit t he purpose, by removing the IR Blocking Filter to allow all wavelengths of light to be captured to get natural colours more prominently. He showed case some of his pictures to show how this will matter in capturing natural colours of the celestial objects. He said that modern day cameras have amazing features which makes it so much easier to do astrophotography. But here are some things that we need to be aware of:

The 500-Rule of Star Trails 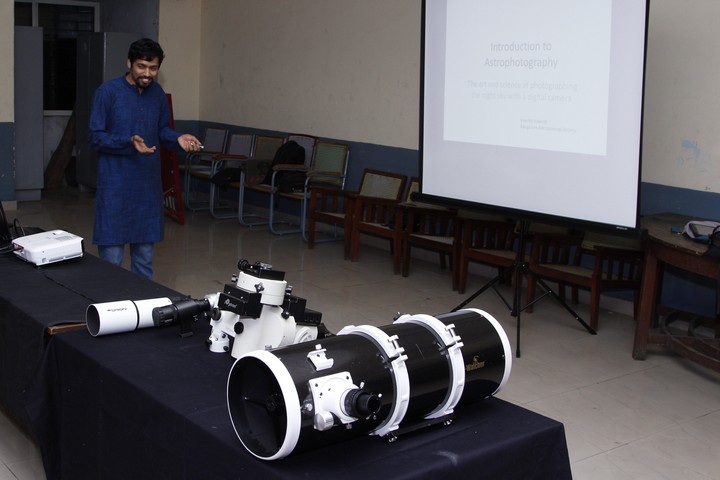 No discussion on Astrophotography without a discussion on the 500-Rule. The 500-Rule helps people determine the length of exposure for a lens at which stars stop being dots and start forming trails. It is inherently tied to Focal Length and Crop Factor of the Sensor. In simple terms (500 / Focal Length * Crop Factor) should provide exposure in seconds up to which one can assume that no trails will be formed.With the advent of cameras with smaller pixel sizes, this rule has been replaced by other formulae.

He quickly demonstrated the post processing techniques he uses like, stretching the picture, identifying the galaxy, nebula, comets etc captured in the picture and then apply various software tools to bring them out properly and show the best to the viewer. He said that it is advisable to click a series of short exposures and stack them to “build brightness” and to reduce noise.  He demonstrated this with his images of Milkyway Galaxy taken during one of his treks in the Himalayas and images of other Galaxies and Nebulas. The audience were much benefited with the practical demo of how he processes the series of images and then stacks them using various software tools available to get beautiful pictures.

The colourful images of nebulas and milkyway were really treat to watch. The audience were really dumbstruck when he mentioned that he had taken several hours to shoot some of his images and then spent additional hours to properly process them to show case what he had captured. The fact that he spends around 20 nights per year to shoot from which he manages to get only 4 or 5 good images, made it very explicit, as to how painstaking it is to do astrophotography, but still, it was happy to note that many in the audience showed keen interest to know the nuances involved. 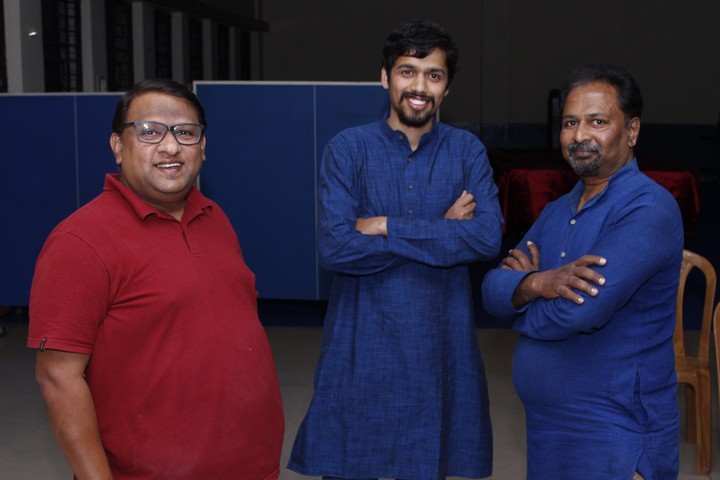 There was also a request to do a workshop with Shri. Keerthi sometime in near future to experience the pain involved in undertaking the journey into the infinite world and capture some lovely pictures. YPS will definitely try to arrange something in future to satisfy the eagerness of all its members.

Shri.Keerthi had all the patience to answer the queries of the audience and give appropriate answers. He ended the session by portraying how light pollution affects the atmosphere with a satellite image of our country and expressed concern that we are left with very little area saved from this like Western Ghats, Desert of Rajasthan or some parts of Himalayas. The session closed with a thunderous applause by each one of the person who experienced a Star Trek kind of an atmosphere at YPS.

Senior members of YPS like Shri. R.Dev,  Shri. Murali Santhanam etc. shared their views on the days presentation and had all the appreciative words for Shri. Keerthi. Shri. Satish, President, YPS extended a heart-felt thanks to Shri. Keerthi, and requested Shri. Chandrashekar and Shri.Murali to present mementos to him on behalf of YPS as a token of appreciation. 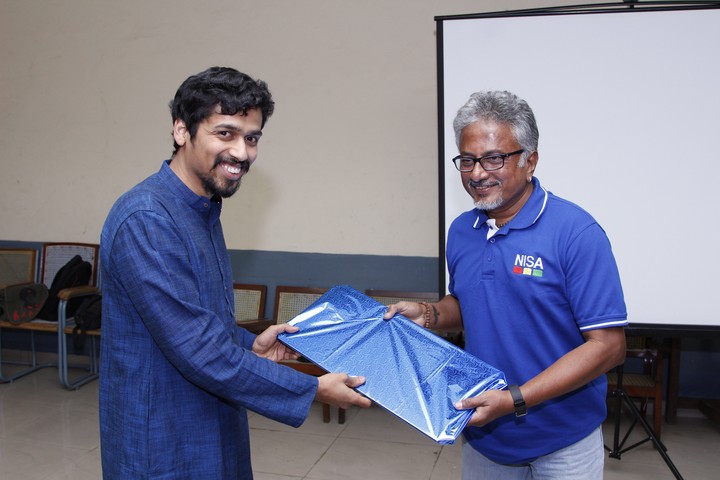 So, the journey at YPS will continue to explore newer areas of photography. Thanks to all the members present and others as well for supporting YPS all the time.