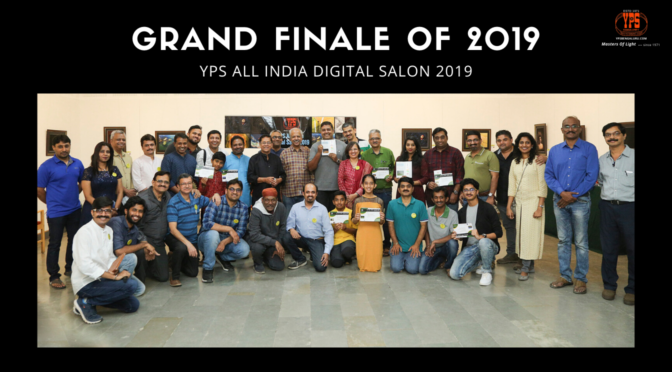 As the year 2019 is coming to an end shortly, YPS had their 37th All India Digital Salon close with the exhibition of pictures on 21st and 22nd December 2019.   The event was held at Karnataka Chitrakala Parishath, the gallery very close to the heart of all art lovers of Bengaluru. The exhibition opened with 48 awarded pictures, 36 from general category and 12 from youth category, on show.

The award presentation ceremony was held on 22nd December 2019 at the exhibition venue with well known and veteran cine actor Shri.Ramesh Bhat gracing the occasion as Chief Guest.   Shri. Ramesh Bhat viewed all the pictures on display with great interest and expressed happiness about the quality of images displayed.

The function commenced with the blessings of lord Ganesh invoked by Smt.Sunita Rani.  Shri.H.Satish, President, YPS welcomed the Chief Guest, past Presidents who had gathered for the function and all other members and award winners.  He appreciated the support given by YPS members and all photo lovers, who had wholeheartedly supported the salon by sponsoring cash awards and extended a warm welcome to all.   He welcomed Shri.Satish Sheshadri of M/s.Technova who sponsored photo paper for printing and printed the Salon Catalogue. Shri.Sreekumar of M/s.Honeycomb who sponsored the printing of images for the exhibition was also extended a warm welcome.

Shri. Srinath Narayan introduced the chief guest Shri.Ramesh Bhat: certain details of Shri. Ramesh Bhat mentioned during the introduction surprised Shri. Ramesh Bhat as well, who appreciated the efforts made to gather the details and presenting it so wonderfully.    In his address, he also mentioned that his day was well spent by getting the opportunity of viewing some wonderful pictures in the presence of photo artists.

Shri. Manju Vikas Sastry, Salon Chairman presented the Salon Report by giving the statistics as well as certain highlights of the salon, like the judging session being telecast live and details of the Salon.  Shri. Girish Ananthamurthy called upon the award winners present and Shri. Ramesh Bhat presented the awards. He was especially happy while presenting the awards to the youth category winners. He interacted with winners and appreciated their skill, and blessed them for their future.   It was heartening to see the beaming faces of all award winners when they received the awards at the hands of one of the great artist of Kannada film industry and theatre personality. In his address, Shri. Ramesh Bhat mentioned that his day was well spent and thanked YPS for giving him an opportunity of viewing some wonderful pictures.  He also mentioned that photo art should be used for commercial purposes, only then the artists will have value and expressed concern that photo art is not getting its due. He requested YPS to inform him about all the future exhibitions as well and he would like to visit and witness the pictures. He released the Salon catalogue, beautifully designed by Shri. Rajasimha S, a YPS member and printed by M/s.Technova.

The members had a surprise when Shri. Manju Vikas Sasty revealed that all the Salon Catalogues of various Salons organised by YPS since beginning were now digitally available on YPS website, for viewing.   He appreciated the support of Shri.M.S.Hebbar, who had preserved the catalogues over the years and provided the same for undertaking this wonderful venture of digitising the same and making it available online for easy viewing.  He had a special appreciation for Shri. Srinath Narayan and Shri.Murali Santhanam for supporting and helping him in realising his dream conceptualised two years ago. The online content in YPS website containing all the salon catalogues was made live by Shri.M.S.Hebbar in the presence of chief guest Shri. Ramesh Bhat, Shri.H.Satish, President and all other members of YPS.

All the sponsors of awards as well as media partner and print partner were honoured by presenting a memento as a token of appreciation for the wholehearted support they had extended to YPS in organising the Salon.

Shri. Manju Vikas Sastry proposed a vote of thanks; he thanked his salon committee members, executive committee members of YPS and all others who made this Salon happen so smoothly.  He remembered every single person and thanked each one of them for their contribution. He thanked the media and press for giving good coverage for the salon and requested their continued support.  The function concluded at about 12.30 pm followed by lunch for all those who had gathered. It was another feather in its cap to YPS, that 37th edition of All India Digital Salon concluded successfully, which was well appreciated by one and all