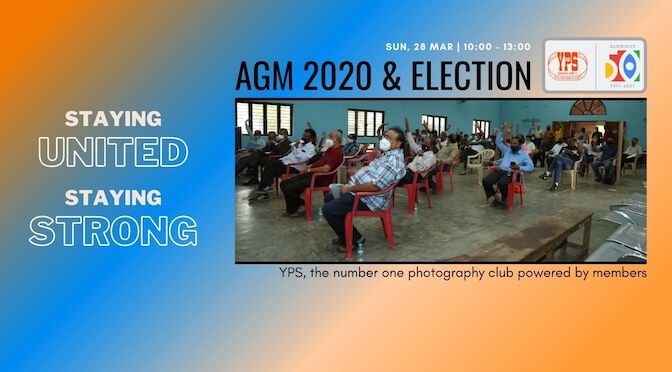 The Annual General Meeting for the year 2019-20 was held at RBW Silver Jubilee Hall, Malleshwaram, Bengaluru. 49 Life Members and 21 Individual Members attended the AGM demonstrating solidarity, care and commitment for Youth Photographic Society. Members are the reason for the sustained growth of YPS over 50 years. The AGM 2020 is another demonstration of the strength of YPS membership.

Note: This is not the Minutes of the Meetings of AGM 2020. It will be published and shared with members through email.

The Annual General Meeting 2020 was announced on March 1st through web-site and email to the members. The proceedings were carefully planned to minimize the risk of pandemic.

All members were temperature scanned at entrance to the hall and were asked to sign a Covid Declaration before they could register. Hand sanitizers and gloves were available for members to use.

Satish made a passionate speech highlighting how YPS ascended to become the number one club in India. He shared information on the YPS Subcommittees that were formed to operate as an extended arm of the Executive Committee making YPS to excel in multiple areas. He took the examples of Salon Participation Subcommittee that brought over 100 Best Club Awards to YPS in just one year and that of the Newsletter Subcommittee that has been behind the monthly release of the marvellous YPS Journal, the Dṛṣṭi.

Vikas Sastry, took up each item on the Agenda for AGM and presented them for approval by the members.

The Audited Financials were presented by the Treasurer, Chandrashekar Srinivasamurthy followed by questions from members. Then Vikas Sastry completed the remainder of the agenda items and took the AGM to a closure.

Shri. B S Rajagopal, Life Member of YPS and the Returning Officer for this year’s Elections took over. Earlier on March 20th, the final list of candidates who submitted nominations was circulated to all the members through website and through email.

Since there were only one nomination for each position, Shri B S Rajagopal, announced the names of the newly elected committee. The members of the new Executive Committee are:

Shri. B S Rajagopal, the Returning Officer is standing 4th from left.

All the elected members of the Executive Committee signed the results sheet indicating their consent to accept the role.

All the members present joined for a group photo.

This was followed lunch. Members used the time to socialize with old friends and close the distance created by the pandemic.

As mentioned earlier the Minutes of the Meeting, containing details of resolutions and discussions will be shared with members soon.