A Glimpse of Indian and African Wildlife 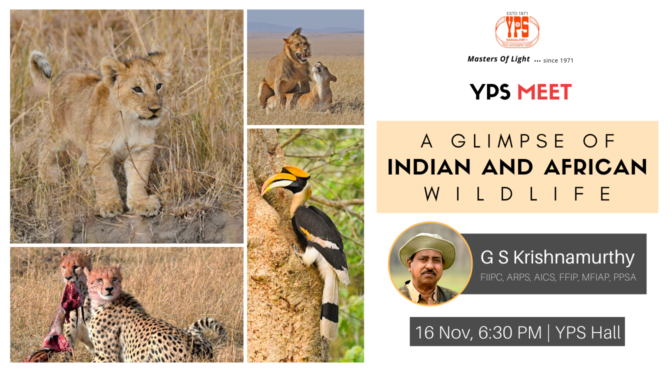 Our next presentation is by one of our past presidents, Shri. G S Krishnamurthy, an avid wildlife photographer.

He will present some of his images taken in Ranganathittu, Bandipur and other North Indian Sanctuaries.  He has also travelled extensively to Africa and will also present his images from South Africa and the Great Migration in Kenya, besides some pictures of photo travel taken during his wildlife safaris.

Shri Krishnamurthy’s passion for wildlife developed during his school days which later developed as a passion for photography during his college days. He became a member of Youth Photographic Society in 1976 and worked under the guidance of photography stalwarts like Dr.G.Thomas, Shri C Rajagopal, Shri E Hanumantha Rao, Shri T N A Perumal and others.

Shri Krishnamurthy is a prolific salon exhibitor and has participated in many National and International Salons. He has won more than 300 awards and certificates of merit and more than 1500 of his pictures were exhibited. Amongst the various awards, he has won IIPC Gold Grade for Salon participation, Fuji True to Life Contest (1999), Best Kingfisher Award (1995) & Epson Color Imaging Contest (2005)

His pictures and articles on wildlife have been published in Kannada magazines like Sudha, Karmaveera, Prajavani etc.

He served as President of Youth Photographic Society for four years, during which he took a keen interest in promoting the Art of Photography. He arranged lectures, demonstrations, slide shows, workshops, nature outings, conducted National Salons etc., for the benefit of the members of the club. He lead nature outings to places like Bandipur, Nagarahole, Ranganathittu, Kokkarebellur etc.

Shri Krishnamurthy was Chairman for two National Salons conducted by YPS. He has also been a jury for some of the National Salons in Nature section. He was honoured by YPS for his services rendered to the Society

Note: We are planning to make our Meets/Events PLASTIC FREE, so request you to please BYOB (Bring Your Own water Bottles) #SayNoToPlastic