YPS felt blessed when the four living legends of Wildlife Photography, Sri. Vivek Sinha, Sri. S. Neginhal, Sri. TNA Perumal, Sri. Allama Prabu and Sri. M N Jayakumar, agreed to join us at the Wildlife Week Celebration Event on October 2nd at Venkatappa Art Gallery. Considering that most of them were in 80s and 90s, this required enormous effort on their part to join us at the event. We deeply appreciate their love for Wildlife and Photography which continues to energize them even at this age. The Event was organized in celebration of wildlife week from Oct 2-8.

As the legends started arriving, it was a moment of joy for many of the senior photo enthusiasts who had grown under their guidance or had worked with them.

Sometimes it was emotional…

But it was heartening to see the legends as charged up as ever to be part of the event.

As they walked into the auditorium, they were met and wished and paid tributes by many senior and junior participants.

The event started to a packed hall. Sri. K S Rajaram welcomed the audience and handed over the stage to Sr. H Satish to deliver President’s address. 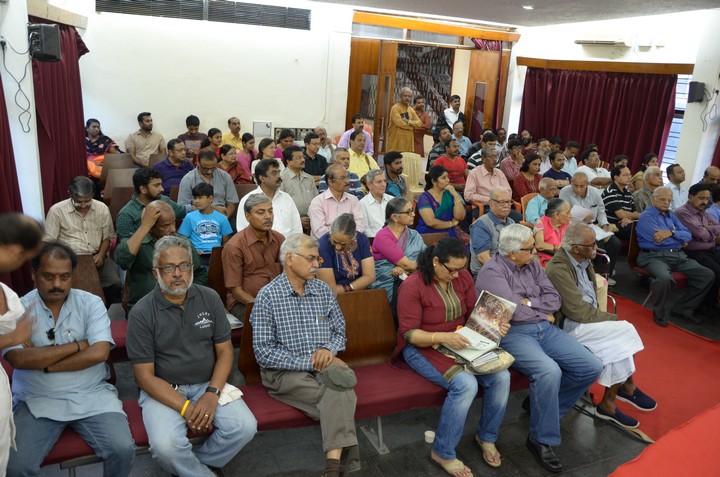 During his speech Sri. Satish spoke about the history behind declaration of Wildlife Week and explained the lion’s role played by each of the legends, whom YPS had invited for honouring, in promoting wildlife and wildlife photography. The profiles of the legends are available under Wildlife Week Celebration Event.

Shortly the honouring of the legends started with honouring of Sri. Vivek Sinha with a bouquet, basket of fruits and a memento. 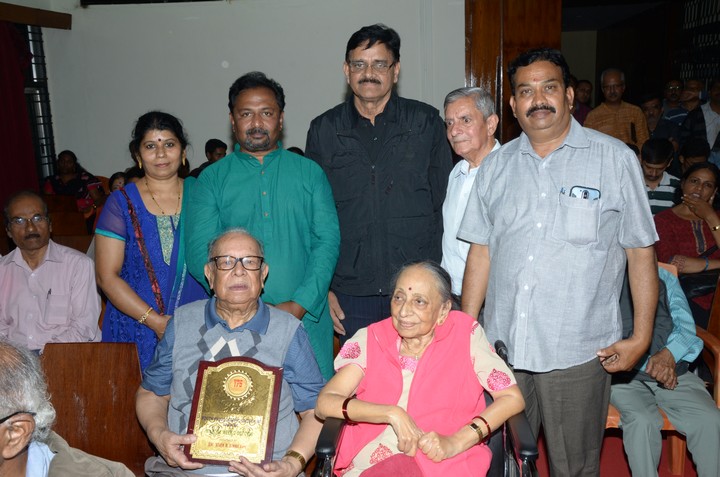 This was followed by honouring of Sri. S G Neinhal who discovered Kokrebelur and declared the same as Wildlife area protecting the thousands of Pelicans arriving migrating there every year. 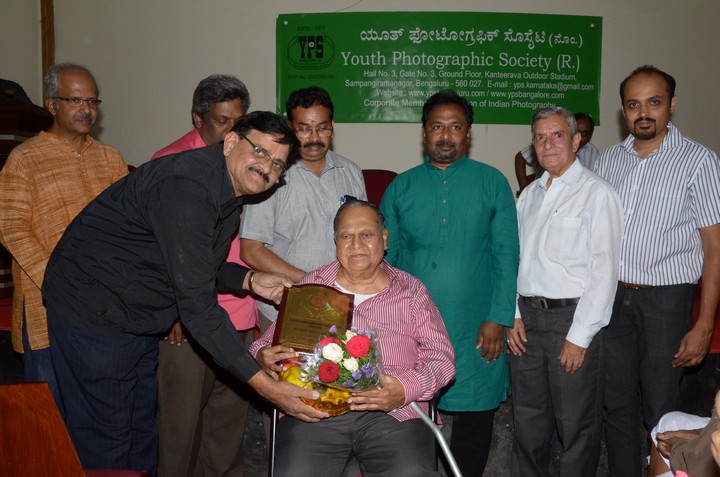 Sri. TNA Perumal then requested Sri. Neginhal to release the book titled “The Doyen of Nature Photography” that Sri. Perumal had written on his mentor and guide Mr. O C Edwards.

Sri. OC Edwards was a school master  in Bishop Cotton Boys’ School. Sri. Neginhal recalled his association with Sri. OC Edwards and how he encouraged many photographers to take up Nature Photography in Bangalore. His dedication and passion earned him many followers including the leading Wildlife Photographers of today. Sri. TNA Perumal personally handed over a few copies of his book to his friends and colleagues. 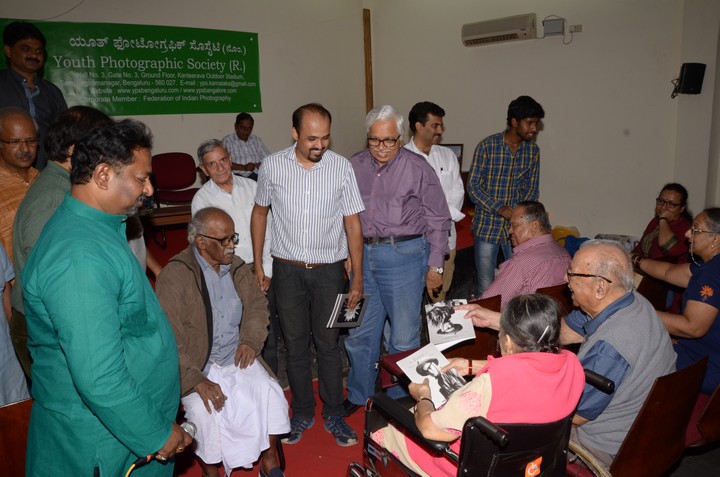 The event then proceeded to honour Sri. TNA Perumal whose dedication to wildlife photography is admired by all. 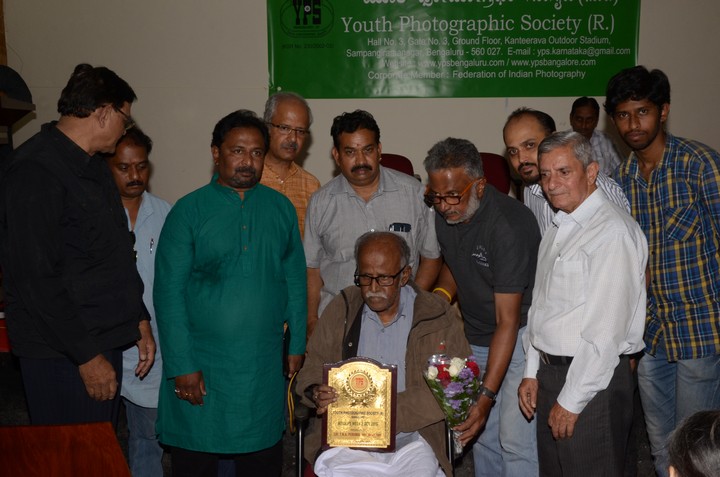 The final person to be recognized is Sri. Allama Prabhu who has spent his entire life photographing nature. His pictures have won numerous awards and recognitions across the globe. 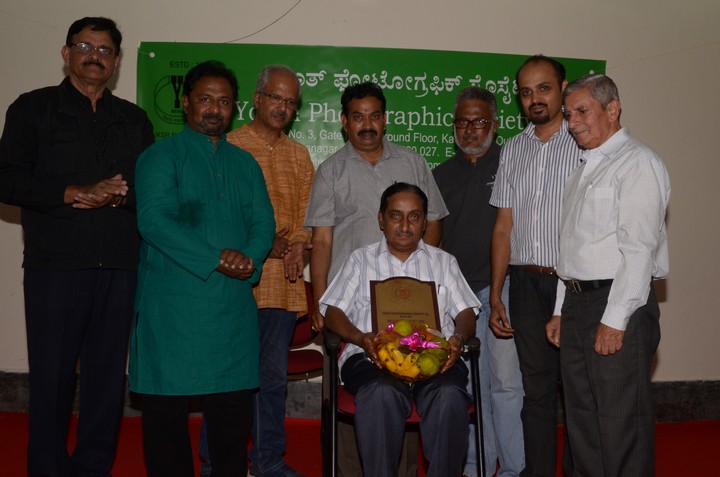 Satish once again thanked all the legends for accepting the invitation and come to Venkatappa Art Gallery amidst immense inconvenience.

The last program of the day was a slideshow and presentation on wildlife by Sri. M N Jayakumar. 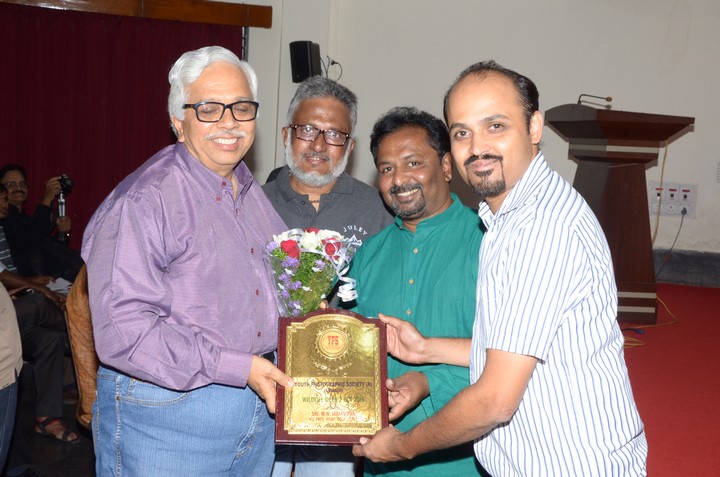 Both Sri. M N Jayakumar and his wife Smt. Asha Jayakumar are ardent wildlife lovers. They are also life members of YPS. Sri. M N Jayakumar decided to pursue the career of a Forest Officer, foregoing the Bank job he had. He was guided by Sri. Neginhal to take up a job in Forest Department and since then there is no going back. His knowledge of the forests, his love of animals and his passion for photography made him one of the top wildlife photographers of India. He has an enviable collection of images, some of which he presented to the participants.

Sr. Jayakumar delivered an excellent well organized set of pictures each of which would make any photographer proud. During the initial set of slides he explained about conservation and the role of tourism and photography in wildlife. He then presented many story based pictures explaining the lives of tigers, elephants, Sloth Bears and other animals. He also covered many pictures of birds and reptiles. 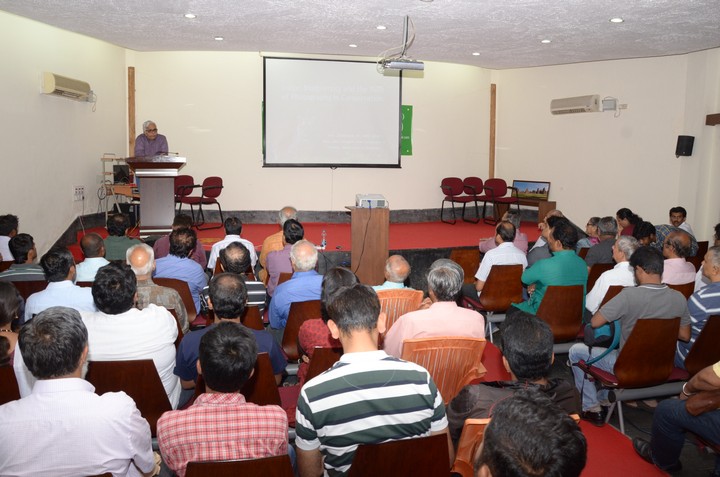 The entire audience stayed till the last slide of a well presented set of marvellous pictures. YPS thanks Sri. M N Jayakumar for his wonderful presentation that would be remembered for a long time to come. Those who missed can see some of his legendary work on his website http://www.mnjayakumar.net/en/.

That brings to an end one of the most memorable YPS events. We thank YPS Members, eminent photographers and others who joined us and made the event a great success.