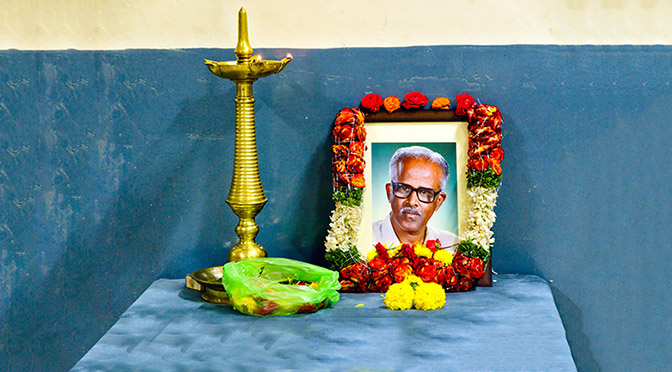 It was just 10 days since Shri. TNA Perumal passed away. Many senior members of YPS assembled at the State Youth Centre at 5:30PM to pay homage to Shri. TNA Perumal. The function was also attended by  Shri. Jayakumar, Perumal’s son and Shri. Nicky Cruze, who worked closely with Shr. TNA Perumal through his career.

Mr. Jayakumar spoke about how much Mr. Perumal loved his work and chose to remain independent all through his life.

Mr. Amar Bhaskas, LM-192 spoke about his association with Mr. Perumal as a member of Vismaya. He pointed out Shri. TNA Perumal’s the attention to details  that set him apart. Another virtue that set him apart is his extreme humility that endears everyone to him.

Everyone offered flowers and observed silence for a minute in memory of Shri. TNA Perumal.

Satih, Presient YPS, announced a Photo Contest and Exhibition at Chitrakala Parishath on April 28-30 as a tribute to Shri. TNA Perumal. The contest will have four sections that Shri. Perumal cherished the most – Wildlife, Birds, Butterflies and Monochrome. The contest is open to public from all over India.