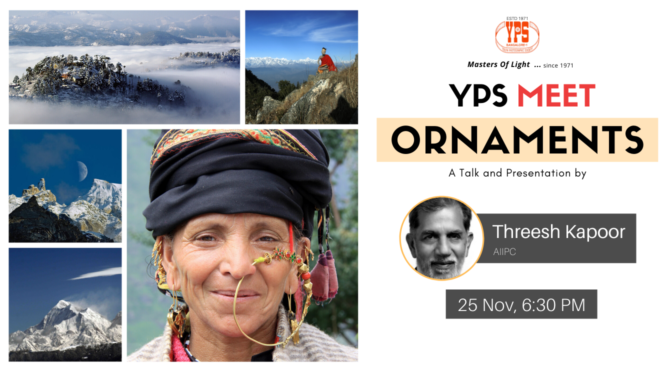 Ornaments are worn not just by humans, specially women but by Mother Earth as well! Her ornaments are the mountains, valleys, gorges, rivers and the ocean!
Threesh Kapoor, an eminent photographer and mountaineer, hailing from the mountainous area of Uttarakhand will showcase his magnificent images from Uttarakhand Himalayas, Kailas Manasarovar, Valleys, River Ganga, and Landscapes from all over.
Along with these ornaments of nature he will also showcase those worn by women in the mountains.
He will also share his knowledge on problems of high altitude photography and how to make good landscapes. 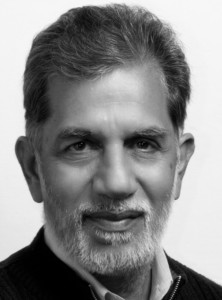 After three decades of career in State Bank of India and Uttaranchal Gramin Bank, Mr. Threesh Kapoor founded The Himalaya Study Centre and Retreat at Kausani, Uttarakhand. He is a Photographer, Social Activist and Himalayan Mountaineer. Threesh is a life member of FIP and Honorary Member of India International Photography Council. He has been part of jury for many National and International Photography Exhibitions. He played a key role in the formation of several Photography Clubs including Lucknow Photography Club, IIT Manakpur Camera Club and Jim Corbett Camera Club. He had contributed his works to more than 28 books.

Mr. Threesh has been honored by Lalit Kala Academy, Uttar Pradesh and Indian Katthak Academy, Lucknow for his contributions to Photography Art. He was also presented with Lifetime Achievement Award – 2007 for Photography by Lucknow Camera Club. He was invited as the member of Indian delegation to International Photography Festival Pengyao (China) in 2005.

Note: We are planning to make our Meets/Events PLASTIC FREE, so request you to please BYOB (Bring Your Own water Bottles) #SayNoToPlastic