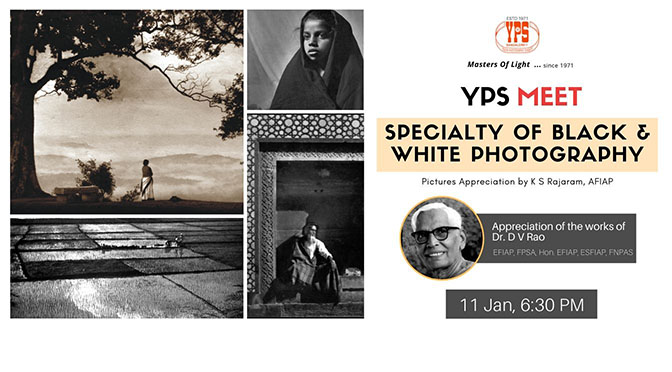 An Appreciation of the works of Dr. D V Rao, Past President of FIP, presented by Shri. K S Rajaram

It’s poetry captured in pictures. Tantalizingly beautiful, stunning and story telling, their simplicity and human approach are strikingly different from that of the others. We are talking about the black and white blow-ups of Dr. D V Rao, which were appearing in leading newspapers and magazines either as exclusive masterpieces or as part of his photo features on a varied travel series.

Dr.  D V Rao was honoured in the Karnataka Rajyotsava Award in 1982 and was also presented with the Lalithakala Academy and Sahithya Academy Awards in 1997. At the age of 88, on the first of January 2000 he founded the Sagara Photographic Society and led as its president till his last day in 2004.

Those were the days during 1940s & 1950s that there were only a handful of experts who had practiced black & white photography as an art right from preparing their raw materials upto printing themselves. They had developed and used many formulae and styles of their own. The Federation of Indian Photography, the National body founded during that time by Dr. G Thomas was the only National level Organization, which sponsored and encouraged young photographers and photography Clubs.

Among many eminent personalities, Dr D V Rao was one of the few dedicated photographers who stood by Dr. G Thomas and also occupied apex status of President of the Federation for quite sometime. Dr. Rao served FIP as Vice President and also Secretary in different divisions and always maintained his discipline and consistent principle for strengthening FIP. He also brought recognition internationally for Indian Photography. He encouraged many upcoming photographers with his sincere guidance and also had been the cause of starting quite a few photographic associations.